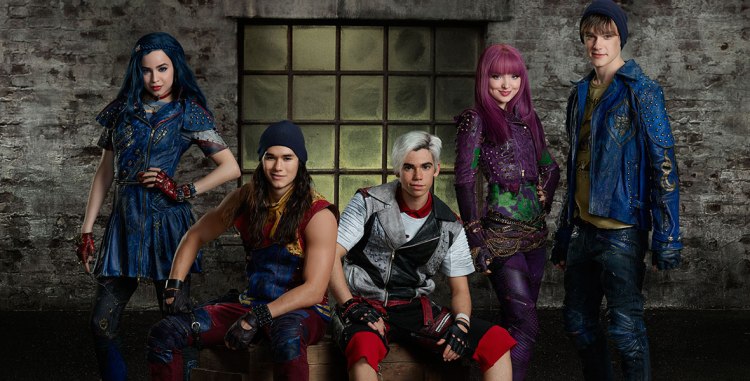 In Descendants 2, we’re back in Auradon following Mal, Evie, Jay, and Carlos after they decided to abandon their evil upbringing and stay at Auradon Prep. Mal, in particular, is dating King Ben and has the spotlight on her as she struggles to become the perfect lady of the court. Unfortunately, Mal lets the pressure get to her and decides to give in to her evil roots by returning to the Isle of the Lost. Little does Mal know, Uma (the daughter of Ursula), has taken over the Isle in Mal’s absence and is set on breaking the island’s barrier.

I’m not sure what changed during the two years between Descendants and Descendants 2, but I found this sequel to be SO MUCH better than the original film. The opening song already had me a lot more interested in the plot. All of the songs in this sequel had some sort of purpose that moved the plot along, which was one of the problems I had with the first film. I thought that all of the songs were pretty strong, but “Chillin’ Like a Villain” has to be my favorite (seriously. I’ve had it on repeat since I finished watching). The dancing didn’t blow me away, but the big choreographed scenes like the one at cotillion at the end of the film were very memorable!

The plot of the Descendants 2 was also a lot more intriguing than the first film. Mal’s going through an identity crisis between wanting to be who she was before Auradon and attempting to be the perfect court companion for Ben. It makes sense that she would be questioning it all when there’s so much attention on her. Although Mal’s internal conflict is a large part of the movie, this one doesn’t feel like it was another “Mal and friends” adventure. We finally got to see more of Evie, Jay, and Carlos. Jay and Carlos finally got the screen time they deserved in this one, and the character growth! We get to see Jay shine in sports, and Carlos gets a love-interest. They didn’t feel like afterthoughts in this film, but a true part of the friend group. I couldn’t help but smile every time we got see more of them. Evie is also very comfortable in being herself, and I liked that she wasn’t only Mal’s best friend, but she had her own agency. Evie definitely became my favorite character. Also, the addition of Uma’s character gives us more time for true conflict (outside of Mal’s own problems), and as a result, we see the four friends work together to save Ben. The theme of friendship was strong in this one, and it felt so much more authentic. Descendants 2 showed us how much the four of them have changed since being at Auradon, and I really appreciated it.

China Anne McClain’s character, Uma, may have been the villain, but we were able to understand her and frustrations. She wasn’t invited to Auradon Prep, and she felt spited by that. I didn’t love her character, but her songs were catchy and her blue braids were a nice touch. I totally did not see the whole love potion debacle coming. For a brief moment, I genuinely thought that Ben had fallen for Uma! It was a fun twist, and it speaks to how much better the writing has gotten since the first film.

There were still a few cringe scenes in the film, but that was expected. There’s a battle scene on Uma’s ship that seemed a bit long for no reason, and some the shots of the movie can only be described as awkward. The battle between Uma in her octopus form and Mal as a dragon was a bit underwhelming and weird, but it didn’t bother me too much. However, I can say that the use of green screen and CGI was so better in this installment. Some of the use was still questionable, but at the very least, it looked good.

Descendants 2 made me care about these character so much more than I could have after the first film. I seriously could not stop smiling and laughing while watching this movie.

If you were let down by the first Descendants film, I’d give this sequel one fair chance. It just might surprise you, too!